V2X hardware security module is based on tamper-proof microcontroller 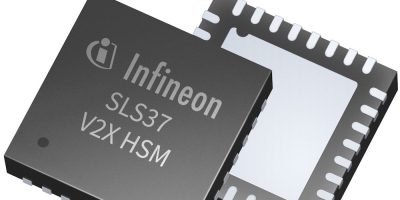 Trends such as electrification, autonomous driving and connected cars are leading to an increase in the number of communication interfaces in vehicles – wired or wireless. This presents new challenges because the numerous communication channels create new attack surfaces and increase the vulnerability of the systems, explains Infineon Technologies.

To provide the highest level of protection, it has launched the SLS37 V2X hardware security module (HSM) for vehicle to everything (V2X) communication. The SLS37 V2X HSM is based on a secured, tamper-resistant microcontroller tailored to the security needs in V2X applications within telematics control units. It protects the integrity and authenticity of messages, as well as the privacy of the sender. The HSM received the Common Criteria EAL4+ certification, which is expected to become mandatory in European V2X systems.

In a V2X host environment, the discrete HSM helps system integrators to solve the conflicting requirements of high performance and high security. The scope of the SLS37 V2X HSM is focused on high security tasks such as key storage and the generation of signatures for outgoing messages. This removes the burden of a Security Certification from the host processor, which runs the Linux OS (operating system), from the application software as well as the verification of incoming messages.

In addition to automotive telematics control units, the SLS37 V2X HSM can be used in roadside units or other infrastructure for V2X communication. It supports all major vehicle credential management systems including SCMS, CCMS and ESPS. It accepts a wide supply voltage range from 1.6 to 3.6V, comes with a high speed serial peripheral interface (SPI) with up to 10MHz and is qualified for harsh automotive applications according to AEC-Q100.