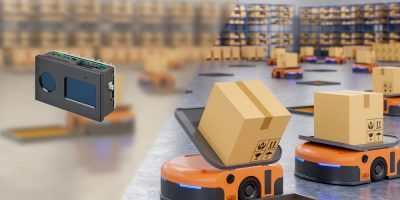 The 3D precision time of flight (ToF) ranging sensor module delivers positioning, autonomous-guidance and proximity sensing for a wide range of applications. Gabriele Fulco, European product marketing manager of sensors at Omron described the B5L-A2S-U01-010 as a mechanical eye that is capable of accurately detecting the surrounding environment. It is expected to contribute to the more widespread use of autonomous robots as well as the automation of various other machinery and equipment.

The B5L sensor module can be fitted to moving objects such as autonomous mobile robots, to provide real-time contextual information such as guidance, collision avoidance, and cliff detection. Alternatively, located in a fixed position, the sensor can accurately detect moving objects in the field of view, making it equally suitable for use in automated packaging equipment, security systems, intruder detection, and patient-monitoring and care for the elderly systems.

The Omron B5L-A2S-U01-010 operates on the proven ToF principle, calculating distances to objects in real time by measuring the round-trip time for near-infra red radiation from the module’s emitter to be reflected from objects in the field of view and returned to the receiver. The B5L’s optical design technology for the stable measurement of three-dimensional distance information operates across a wide area even in sub-optimal conditions, such as under sunlight, says Omron. Running at up to 20 frames per second, its specifications are optimised for long periods of continuous operation to allow it to be used as an embedded sensor in various instruments.

The 103 x 43mm module is fitted with a 24V DC power connector and Micro-USB communication port, offering easy integration and flexibility for embedded systems designers. The 940nm near-infra red emitter and 240 x 320 pixel receiving array, gives ranging information for the entire field of view and measures the absolute distance to objects from 0.5m to 4m. The module offers ±2 per cent precision (at a detection distance of 2m). Built-in temperature compensation simplifies its integration into autonomous robots and other equipment as it eliminates the need for the design of separate compensation processing for different environments.

The wide viewing angle and 0 to 50 degrees C operating temperature range, means that the B5L-A2S-U01-010 can be used in various indoor applications.

The B5L-A2S-U01-010 is in production now and available directly from Omron Electronic Components Europe or through its network of European distributors.