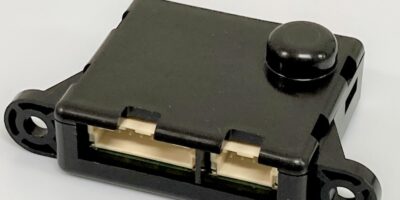 To support autonomous driving systems by distinguishing between variations in a driver’s grip on the steering wheel, an electronic control unit (ECU) developed by Alps Alpine will contribute to safe, comfortable mobility, says the company.

In the field of autonomous driving, there is growing deployment of systems that enable a vehicle, under certain conditions, to automatically follow the car in front while keeping to the lane, reports Alps Alpine.

Such vehicles need to be able to detect and assess a driver’s driving status to allow safe and smooth switching between automated and manual driving. One aspect is to determine the driver’s grip on the steering wheel to enable safe switching between driver-controlled and system-controlled modes. Determining the right time to switch between autonomous driving assistance and manual driving requires constant monitoring of the vehicle’s drive status and the driver’s driving posture to ensure safety. If autonomous driving assistance is not appropriate, the driver needs to be quickly warned that the assistance is to be disengaged and will need to immediately revert to manual driving.

Capacitive sensing is the dominant technology used for steering wheel touch detection due to its cost and functional performance. The ECU uses data obtained via a special-purpose capacitive sensor, wrapped around the steering wheel, to determine if the driver is touching it and conveys the assessment to an advanced driver assistance system (ADAS). Existing hands-off detection systems are mono-zone set ups, with a single electrode, Alps Alpine has developed a multi-zone configuration with four electrodes. Dividing the steering wheel and grip patterns into smaller sections enables efficient system switching and enhanced touch assessment reliability, says the company. This allows a more detailed assessment of driving status than a basic touching/not touching determination reached using an existing single-electrode sensor, Alps explains.

The ECU has been designed for use with a special-purpose steering wheel capacitive sensor to maintain resistance to environmental factors such as temperature, humidity and electromagnetic noise.

Varying conditions may lead to a variance in the data obtained via the capacitive sensor. To accommodate the separate circumstances, Alps Alpine can supply an originally developed algorithm to accommodate the parameter changes.

Reliability is enhanced by an original failure determination feature and the ECU sensor conforms to ISO 26262, the international standard on the functional safety of electrical and electronic systems in automobiles.

Alps Alpine will also put forward product proposals, representing examples of applied capacitive technology, for a wide range of human-machine interfaces (HMI) both inside and outside the vehicle cabin, not just hands-off detection.