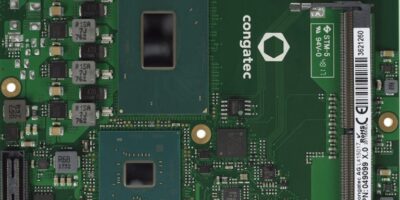 This brings the total of processor module variants now available on this single microarchitecture to 14, offering wide scalability, points out the company.

The two six-core congatec modules with a TDP of 25W offered on Intel Xeon E-2276ML and Intel Core i7-9850HL processors enable developers to create passively cooled embedded edge computing systems that can run up to 12 standalone virtual machines in parallel, via hyperthreading. This allows operation even in fully sealed systems, under the harshest environmental conditions and with the highest IP protection, asserts congatec. The same applies to the two quad-core modules with Intel Xeon E-2254ML or Intel Core i3-9100HL processor as well as the Intel Celeron G4932E processor-based module, all featuring a – partly configurable – TDP of 25W.

The company has released these modules in response to OEM customers using multi-core platforms to consolidate separate systems on a single embedded edge computer. Hypervisor technology allows customers to operate up to 12 virtual machines in parallel on one system, including real-time controllers (soft PLCs), industry 4.0 gateways for tactile internet via time synchronised networking, IoT gateways for sending big data towards the cloud and central management systems, as well as vision systems, artificial intelligence (AI) and deep learning applications. Software-defined networking functions such as intrusion prevention and detection systems that analyse data traffic parallel to the applications can avoid latencies that would arise with serial operation of analytics and applications, advises congatec.

In addition to embedded edge computing, they can be used in medical imaging systems and human machine interfaces (HMIs) as well as gaming, infotainment and digital signage systems.