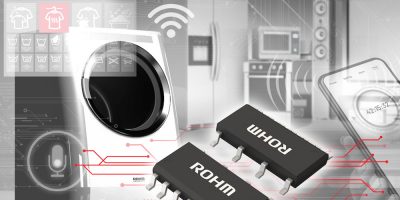 Integrated integrated zero cross detection ICs in Rohm’s BM1ZxxxFJ series are optimised for home appliances such as vacuum cleaners, washing machines, and air conditioners.
Domestic appliances are with communication functionality (i.e. Wi-Fi) are required to be always-on to maintain communication. At the same time, manufacturers are required to reduce standby power consumption to around 0.5W. This calls for lower standby power consumption by the motor and power supply blocks along with innovative new technologies, says Rohm.

The BM1ZxxxFJ series reduces standby power consumption of the zero cross circuit to just 0.01W while continuously powering the system. The error in delay time (which varies depending on the AC voltage) that exists with conventional photocoupler-equipped zero cross detection circuits is limited to ±50 micro seconds or less. This allows for the efficient drive of motors, even with the different AC supply voltages used in various countries and regions, as well as microcontrollers. At the same time, eliminating the need for a photocoupler contributes to greater application reliability by reducing risks related to age-based degradation.

Both pulse and edge waveforms used in home appliance specifications are supported by the BM1ZxxxFJ series, eliminating the need for software changes when replacing conventional zero cross detection circuits. There are six models in the series.

The BM1ZxxxFJ series is available now.