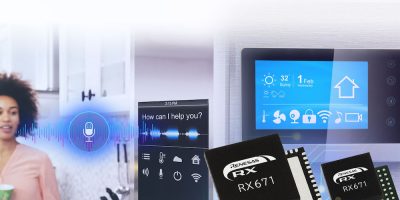 Adding 32-bit microcontrollers with touch sensing and voice recognition capabilities for contactless operation to the RX family, Renesas Electronics has added the RX671 microcontrollers to its RX600 series. They are built around an RXv3 CPU core operating at 120MHz and integrates flash memory supporting fast read access at a clock speed of 60MHz, for a CoreMark score of 707. Power efficiency is claimed to be among the best in the class at 48.8 CoreMark/mA.

They are available in a variety of packages with pin counts ranging from 48 to 145 pins with up to 2Mbytes of flash memory and 384kbytes of SRAM. Typical target applications require advanced functionality, power efficiency and a compact size, for example heating, ventilation, and air conditioning (HVAC), smart meters, and smart home appliances. The RX671 is available with 2Mbyte of flash memory in a 64-pin TFBGA package which measures just 4.5 x 4.5mm, one of the smallest microcontrollers with 2Mbyte flash memory, said Renesas.

The RX671 integrates Renesas’ Trusted Secure IP as a part of its built-in hardware security engine which comprises an encryption engine with AES, RSA, ECC, and SHA support, a true random number generator (TRNG), and an encrypted key management mechanism. Combining these with the dual-bank function and protection function of the on-chip flash memory, allows users to implement capabilities such as secure firmware updates and secure boot.

Renesas also offers two evaluation boards, the Target Board for RX671 to evaluate the RX671 without the need for a separate debugger and the Renesas Starter Kit+ for RX671 for evaluation. Both boards are equipped with connectors to the Wi-Fi Pmod Expansion Board (RTK00WFMX0B00000BE) for evaluation using wireless network connectivity. The combination of Renesas Starter Kit+ for RX671 and the Wi-Fi Pmod Expansion Board is FreeRTOS-certified, allowing users to obtain certified sample programs from GitHub.