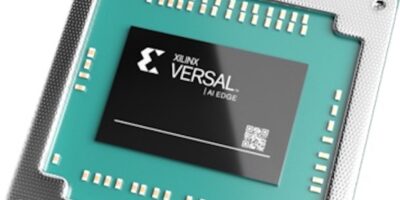 Designed to enable AI innovation from the edge to the endpoint, the Versal AI Edge is Xilinx’s AI chipset which has four times the AI performance per watt than graphics processing units (GPUs) and 10x greater compute density than the Zynq Ultrascale+, says the company. The Versal AI Edge series is the world’s most scalable and adaptable portfolio for next-generation distributed intelligent systems, claims Xilinx.

The latest addition to Xilinx’s Versal ACAP portfolio of adaptive SoCs, the Versal AI Edge devices can be used for automated driving systems with the highest levels of functional safety (ASIL D). They can also be used for collaborative robotics, predictive factory and healthcare systems, and multi-mission aerospace and defence payloads, says Xilinx. The powerful AI engines have an enhanced memory hierarchy to deliver up to four times the machine learning (ML) compute performance per W compared with GPUs. They also have lower latency, continues Xilinx.

The Versal AI Edge series takes the production-proven, 7nm Versal architecture and miniaturises it for AI compute at low latency, with power efficiency as low as 5W together with safety and security measures required in edge applications.  The Versal AI Edge series matches the engine to the algorithm, with scalar engines for embedded compute, adaptable engines for sensor fusion and hardware adaptability, and intelligent engines for AI inference and advanced signal processing workloads ranging from beam forming and radar/lidar processing.

Connectivity blocks range from LPDDR-4266, 32Gbits per second transceivers to meet all the necessary protocols in edge applications, 40G multi-rate Ethernet, PCIe Gen4 with CCIX, and native MIPI support for vision sensors at up to 8Mpixel resolution, which is critical to Level-3 ADAS and above. The enhanced memory hierarchy which includes Accelerator RAM, makes the Versal AI Edge series suitable for a wider range of applications across numerous markets, according to Xilinx.

Versal AI Edge series design documentation and support is available to early access customers, with shipments expected during the first half of 2022, and a roadmap for automotive- and defense-grade devices.