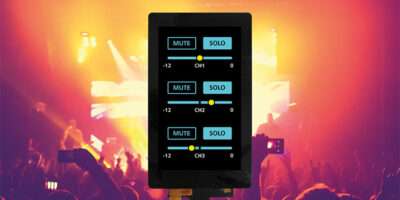 Display, monitor and embedded computing specialist, Densitron, has launched a set of MIPI display serial interface (MIPI DSI) displays for a variety of applications, ranging from security, broadcasting, telecom and process control systems to smart meters. The move reflects the growing demands for the same premium quality, high-resolution graphical display technology used for personal mobile devices to be tailored for use in industrial applications, says Densitron.

The MIPI DSI displays are available in three sizes, four, 4.3 and five inches (101, 109 and 127mm). In addition to high colour saturation, they are claimed to have outstanding readability at all viewing angles and projected capacitive touch (PCT) and optical bonding options. There is also the possibility of adding haptic feedback technology to provide the sensation of touch when a user makes contact, as well as lens customisation for all of these options.

The displays enable low power, low electromagnetic interference (EMI) yet allow for the interconnection of other components such as cameras for high performance applications.

The MIPI DSI range is supported by Densitron’s new Aurora SBX which provides a development platform to create modern graphics user interface (GUI) applications to develop and power functionality in a fully-operational human machine interface (HMI) for a range of industrial applications.