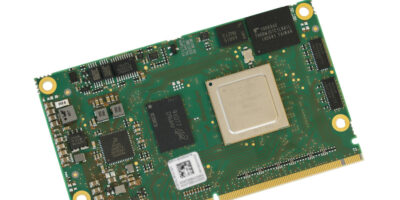 Believed to be the first system on module (SoM) with NXP Semiconductor’s S32G274A processor.

For trace and debug tasks, the SoM supports Aurora and JTAG interfaces. MicroSys also offers a board support package including bootloader configuration and all required Linux drivers.

There is native support for 18 CAN interfaces, making the MicroSys SoM particularly suitable for developing comprehensive vehicle networks. The SoM is an alternative to using generic expansion buses to connect CAN controllers which can generate high interrupt loads on the main processor. The other alternative is to use FPGAs but these can be expensive, requiring additional development resources for FPGA programming.

The NXP S32G2 processor was developed specifically for vehicle networks and the MicroSys miriac MPX-S32G274A is the world’s first SoM to integrate the processor, says the company. “OEMs benefit from an application-ready building block for their connected real-time controllers in automotive and other functional safety applications. They also benefit from high computing performance, faster Ethernet and automotive connectivity including massive native CAN support, plus comprehensive functional safety and security features,” explains Ina Sophia Schindler, CEO of MicroSys Electronics.